Werner Scholtz, professor of law at UWC, has called for a paradigm shift in international environmental law, which he says ‘is concerned with the conservation, inter alia, of sentient species, but generally ignores the welfare of individual animals. It therefore does not reflect a recognition of the moral worth of animals and perpetuates the dichotomy between conservation and welfare’.

The way forward is to ‘ascertain how welfare concerns may be incorporated into international wildlife law in order to ensure that it takes cognisance of the moral worth of animals’.

Prof Scholtz has been expounding these ideas in a number of recent publications, in particular his edited book, Animal Welfare and International Environmental Law: From Conservation to Compassion. Published in 2019 by Edward Elgar, its overarching claim is that, ‘[a]t a time when the planet’s wildlife faces countless dangers, international environmental law continues to overlook its evolving welfare interests’.

Particular areas of emphasis in the book are on animals considered individually rather than as part of a generalised collectivity; on their intrinsic moral worth rather than extrinsic use-value; and on wildlife rather than only domestic and agricultural animals. 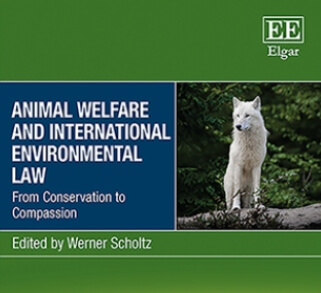 In his introduction to the multi-author volume, Prof Scholz says that anti-cruelty legislation ‘applies predominantly to domestic and agricultural animals’, whereas wildlife welfare protection is generally ‘sparse’ at the international and domestic level.

‘It is … abundantly clear,’ he writes, ‘that wildlife law (of the majority of jurisdictions) as well as international wildlife law do not contain welfare protection as an objective but rather the focus of wildlife law is to pursue the sustainable and conservation of wildlife. This approach is indicative of the anthropocentric and instrumental ethic that underlies the disconnect between the objectives of animal welfare and conservation.’

Against this backdrop, the aim of the book is ‘to respond to the identified need to develop international environmental law, in particular international wildlife law, which pursues not only conservation but also exhibits elements of compassion’.

The volume has been praised by, among others, Arie Trouwborst of Tilburg University in the Netherlands: ‘This book does two things very well. It demonstrates that the ethical imperative of treating non-human creatures with respect makes a better conceptual fit with the international legal order’s basic tenets than is often assumed. At the same time, it starkly exposes the challenge of ensuring that attention for the welfare of individual animals does not impede the effectiveness of current policies for the conservation, recovery and sustainable use of healthy wildlife populations and ecosystems.’

Click here to read more about Animal Welfare and International Environmental Law: From Conservation to Compassion.