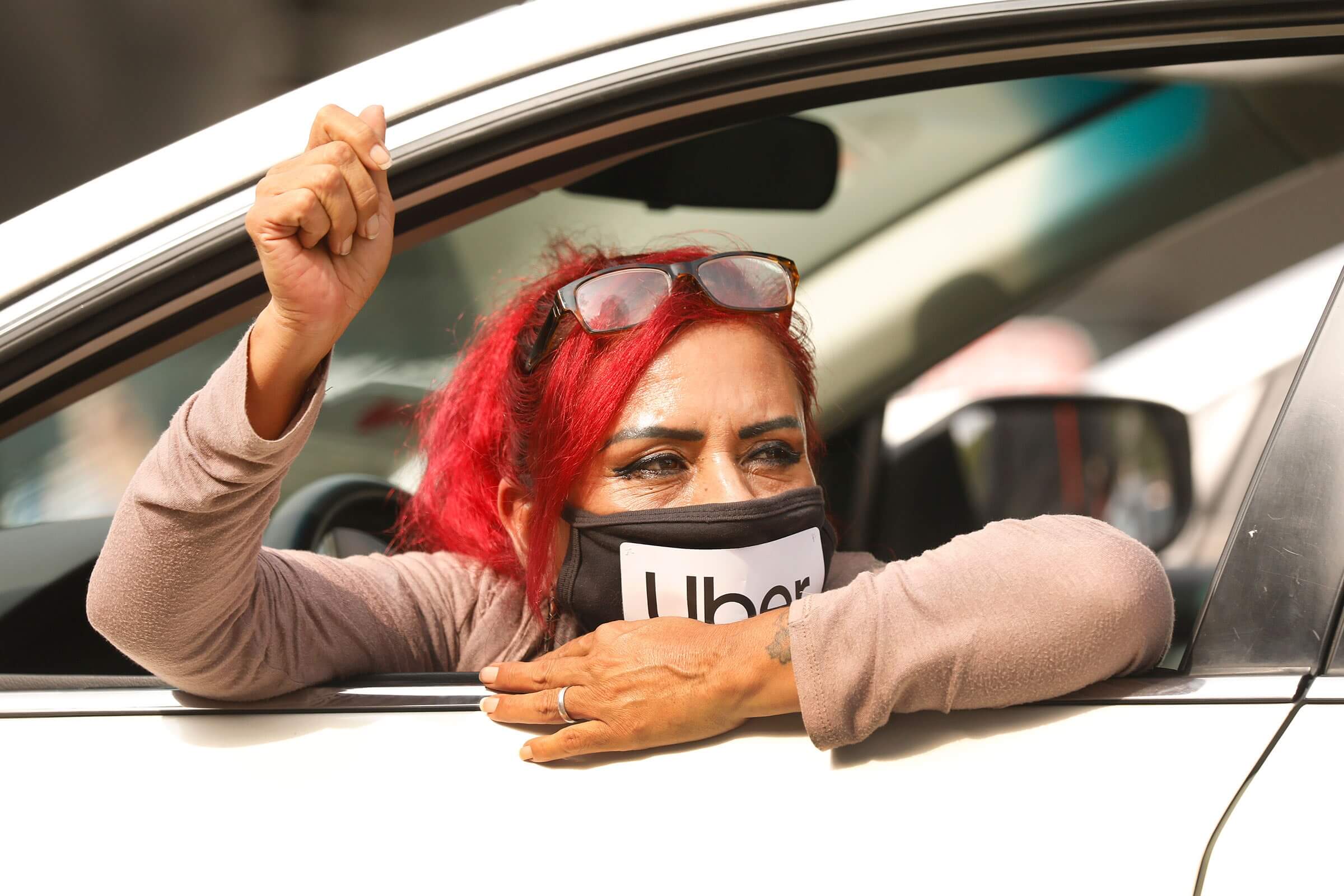 ON NOVEMBER 3, California voters will determine how the state’s gig workers will, well, work.

A ballot measure would create a new legal classification for Uber drivers, Instacart shoppers, and DoorDash deliverers—not quite employees, but not the independent contractors they’ve been until now.

Under Proposition 22, lavishly funded by the gig companies, their workers would be assured of something resembling a minimum wage, as well as some health care coverage and access to workers’ compensation.

If the measure fails, the companies likely will have to recognize their workers as employees. Uber and Lyft have threatened to leave the state if that happens, though court filings from a related legal case suggest they might instead shift the way they operate in California.

Opponents, including labor- and driver-advocacy groups, say gig work is too precarious. They argue that transforming contractors into employees may bring some stability to those who depend on apps to keep them afloat.

The fight is shaping up to be the second-most expensive ballot fight in the state’s history, and could become the most expensive by Election Day. Prop 22 supporters, including Uber, Lyft, DoorDash, Instacart, and Postmates (which was recently acquired by Uber), have poured nearly $200 million into promoting it. They’ve unleashed a barrage of advertisements on Californians’ airwaves, inboxes, text messages, and even cell phone push notifications, which https://www.theverge.com/2020/10/15/21517316/uber-spamming-user-political-push-notifications-prop-22-vote#:~:text=Now%2C%20Uber's%20app%20is%20sending,Prop%2022%20will%20save%20lives.%E2%80%9D&text=Since%20their%20inception%2C%20companies%20like,opportunity%20to%20work%20flexible%20hours."}">Uber has used to proselytize from within voters’ pockets.

The outcome may have implications for other California workers. The measure “may be incentivizing other industries to think, ‘Oh, we can recreate special rules for our industry,’” says Mary-Beth Moylan, a law professor at the University of the Pacific’s McGeorge School of Law, who helps create a guide to California ballot measures every two years. “It could chip away at employment and labor protections in all sorts of ways.”

The upset over Prop 22 began last fall, when California enacted Assembly Bill 5, which narrowed the definition of an independent contractor. According to a “test” set out by the law, contractors must not be under control of direction of the company while working, must perform work that’s “outside the usual course” of a company’s business, and perform the same sort of work for other companies. The test makes it much harder for app-based companies to fall back on their argument that they’re simply platforms connecting one kind of customer, a driver, with another kind of customer, someone who wants a ride. Many industries have said the test is ill-suited for their workers; the California legislature has since passed new rules governing others, like freelance writers and https://variety.com/2020/music/news/california-gig-economy-assembly-bill-5-ab5-musicians-1234583320/"}">musicians.

Since AB 5 kicked in this year, Uber has made some changes to its California drivers’ apps, allowing drivers to be more choosy about the rides they accept and select from a predetermined set of fares. Some drivers say the new scheme helps them make strategic choices, and allows them to make more money. Others argue it pits drivers against each other, in a race to the bottom.

Despite that, the gig companies have insisted the new law doesn’t apply to them. The California Attorney General and three city attorneys disagree: In May, they sued Uber and Lyft for not complying with the law. A judge ordered the companies to comply with AB 5; the case is currently on appeal. Prop 22 effectively lets voters decide.

If gig workers were treated as employees, as AB 5 requires, they would be entitled to minimum wage and would qualify for benefits like overtime pay, workers’ compensation, lunch breaks, unemployment insurance, and paid sick leave. The arrangement could cost the companies thousands of dollars per driver. Prop 22, by contrast, promises workers some new perks. Workers putting in at last 15 hours a week would receive a health care subsidy. It requires the companies to provide some accident insurance and some disability payments, if workers are hurt on the job. And it promises drivers 120 percent of the state or local minimum wage (at least $14.40 an hour), plus 30 cents per mile.

But there’s a big caveat to the pay guarantee: Only a driver’s “engaged time,” or the time between when a worker accepts a job and when they complete it, counts toward that hourly wage. Research https://issuu.com/fehrandpeers/docs/tnc_vmt_findings_memo_08.06.2019"}">commissioned by Uber suggests that drivers spend plenty of working hours waiting for riders—about 30 percent of the total miles traveled by drivers in six cities occur while waiting for the next ride. Those miles wouldn’t be compensated under Prop 22.

If Prop 22 fails, app-based companies have threatened to make big changes to their services, which would disrupt life for both drivers and customers. A https://medium.com/uber-under-the-hood/analysis-on-impacts-of-driver-reclassification-2f2639a7f902"}">blog post by Uber economist Alison Stein suggests that the company would dismiss 75 percent of its drivers, mostly part-time workers, and that Uber fares would spike by 25 to 111 percent. In a statement, Geoff Vetter, a spokesperson for the Yes on 22 campaign, said average wait times for ride-hail trips would increase, and that food and grocery delivery might take 90 minutes instead of 40.

But a https://irle.berkeley.edu/files/2020/10/Pay-Passengers-and-Profits.pdf"}">report published this month by Michael Reich, a UC Berkeley economist who has https://irle.berkeley.edu/files/2020/10/Pay-Passengers-and-Profits.pdf"}">played a key role in driver pay fights in New York and Seattle, casts doubt on Uber’s numbers. Reich suggests the gig companies would use drivers more efficiently and save money on recruiting and retaining drivers, so fares would only rise by 5 to 10 percent. He finds that driver pay would increase by 30 percent if they were treated as employees rather than contractors.

Earlier this year, Uber and Lyft said they might cut off ride-hail service in the state if a court forced them to comply with the labor law. Drivers’ groups call the threats scare tactics, designed to frighten people into voting for the ballot measure.

Affidavits signed by company officials suggest that app-based companies are trying to figure out how to run services while recognizing drivers as employees. A filing signed by Lyft CEO Logan Green says the company is developing implementation plans, should Prop 22 fail, which could include stopping rideshare service in some or all of the state. Uber strategic operational initiatives director Brad Rosenthal wrote that Uber would take up to a year to change how it operates to comply with the new rules. It would create more rigid schedules for drivers and hire people to manage the new system. The company would bar “hundreds of thousands” of California drivers who work for fewer than 40 hours per week, Rosenthal wrote.

In response to new work rules elsewhere, gig companies have created schedule systems. In New York City, both Uber and Lyft created scheduling systems after the city passed 2018 laws limiting the number of ride-hail vehicles on its roads and setting pay floors for workers. Drivers there—who must obtain special licenses, and are more likely to drive full-time than part-time—are sometimes restricted to certain hours, with preferences given to drivers who put in more time on the apps. The stress of complying with the new system has soured some drivers on ride-hail, https://www.vice.com/en/article/pkewqb/the-lockout-why-uber-drivers-in-nyc-are-sleeping-in-their-cars"}">according to a report from Vice.

Uber and Lyft have also floated the idea of using a franchise model, which would allow the app-based companies to get around treating workers as employees and might create a layer of liability between them and drivers. Drivers might be employed by fleet managers, as Uber drivers are in Spain and Germany, where ride-hail is regulated alongside taxi companies. But there are pitfalls for drivers there, too. Scholars warn that franchises https://journals.sagepub.com/doi/10.1177/0019793915586384"}">sometimes skirt labor laws, as the franchisor (in this case, the app-based company) begs ignorance.

Veena Dubal, a professor at UC Hastings School of Law, has studied the effect of franchises on FedEx, which moved to a franchise model for drivers in 2009. The workers, she found, were often less happy after the switch. “The economics of ride-hailing is not likely to create a better scenario for employees,” Dubal https://www.onlabor.org/the-pitfalls-of-uber-and-lyft-as-franchisors/"}">wrote this summer.

Which means that whether or not Prop 22 wins in November, app-based workers should stay alert.