Despite a Rocky Start, Cleveland Model for Worker Co-ops Stands Test of Time 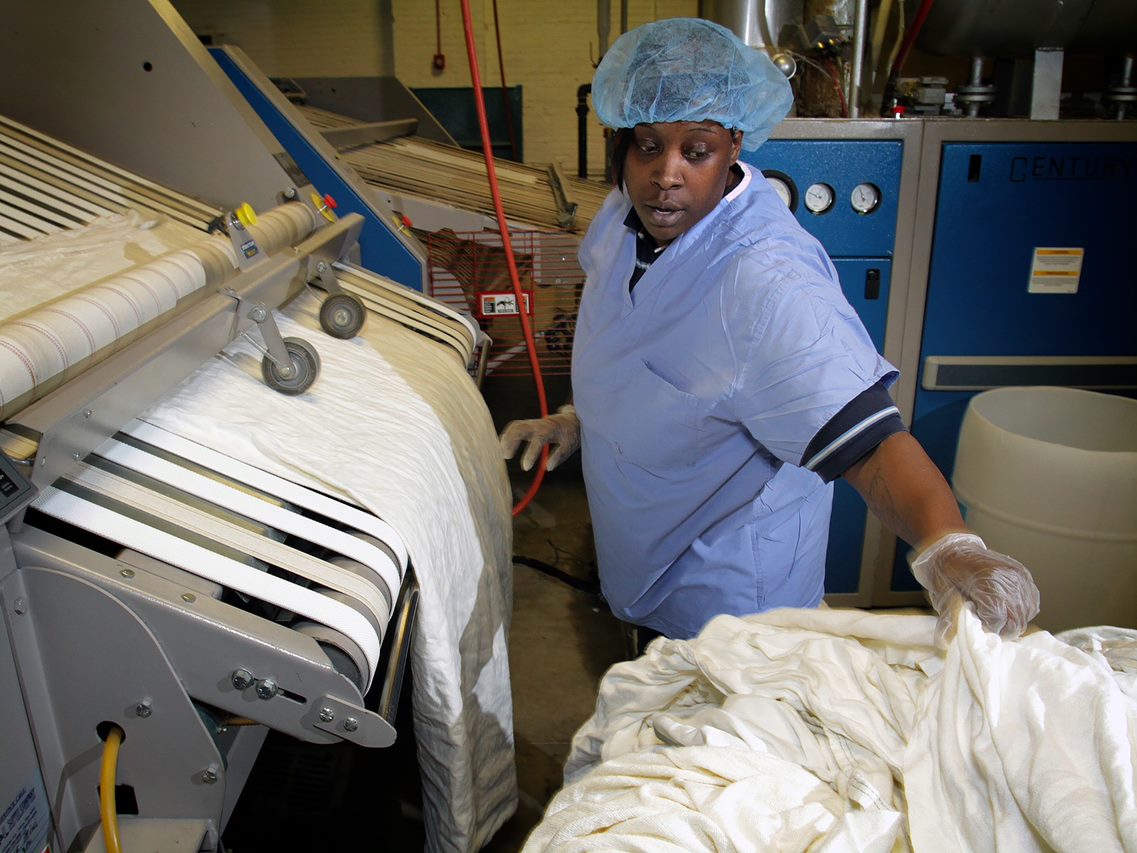 In the year in which COVID-19 shuttered the economy, the member companies of Evergreen Cooperative Initiative are among the few small businesses that saw growth. Not only did they make a profit, but they were also able to distribute that profit to their employees, many of whom happen to be owners as well. Evergreen is an umbrella organization encompassing several independent worker-owned cooperative corporations.

In 2010, Shelterforce wrote about the development of Evergreen Cooperative Initiative. Back then, the idea was relatively new. Only two cooperatives—a commercial laundry business and a solar panel installation company—had opened, and an urban greenhouse was still in the planning stages.

Evergreen had been launched in 2007 by a working group convened by the Cleveland Foundation and included the Cleveland Clinic, University Hospitals, Case Western Reserve University, and the city of Cleveland. Deindustrialization had devastated Cleveland, as it had many other Rust Belt cities. From 1990 to 2016, Ohio lost 396,000 manufacturing jobs, reducing manufacturing jobs from 22.7 percent of all Ohioan jobs to just 12.7 percent. With these memories still fresh in the minds of many stakeholders, worker-owned cooperatives stood out as an attractive economic development strategy: Because the cooperatives are controlled by workers, it was unlikely that they would vote to offshore their own jobs. And with money not being diverted to corporate overhead, cooperatives are in a better position to provide higher wages while maintaining competitiveness.

In the 11 years since then, Evergreen Cooperatives has added three more cooperatives to its ranks, growing from two companies with a total of 18 workers in 2010 to five companies with approximately 320 workers. Those workers are paid 20 to 25 percent higher than employees at the cooperative’s competitors. “Our average pay rate is close to $15,” says John McMicken, CEO of Evergreen Cooperative Initiative. “But when you take profit sharing into account, which could equate to $4 to $5 an hour, we’re hoping that we have a shot at breaking the $20 an hour ‘blended rate,’ if you will.” In 2019, the average compensation at Evergreen Cooperative Laundry was around $18 per hour.

But success did not come immediately, nor smoothly.

How Does Evergreen Work?

Evergreen’s members are not quite traditional cooperatives, where all profits go directly into the hands of the employee-owners. The goal of traditional worker co-ops is to benefit the members of the co-op, while Evergreen aims to not only benefit its workers but the broader community as well by creating new jobs that pay a living wage.

Evergreen uses an innovative structure inspired by the Mondragon Corporation in the Basque region of Spain called a holding company structure. Each cooperative is separately incorporated, with profit-sharing, living wages, democratic ownership, and decision-making present and its own board and business line, but the cooperatives are owned by a larger nonprofit umbrella organization known as the holding company. Each cooperative is launched using capital and training provided by the umbrella organization and pays around 10 percent of its profits to the umbrella nonprofit to go toward the creation of new cooperatives. Additionally, the holding company provides back-office services such as human resources, training, and payroll to each of the individual cooperatives. Evergreen holds a 20 percent equity role in each of the cooperatives, while the employee-owners own the remaining 80 percent. Bylaws are structured in a way that prevents employee-owners from ever owning less than 80 percent of their companies.

Ted Howard, co-founder and president of the Democracy Collaborative, helped develop the job creation and wealth building strategy that resulted in the Evergreen Cooperative Initiative. Howard recalls that the process of bringing the holding company structure to the U.S. was difficult. “I had the job of writing up the 501(c)(3) application, and it was a structure that the IRS had never seen before,” he says. “It took me a year to get approval for this and a lot of back and forth to get certified, but now we have a precedent with the IRS, so if any city wanted to establish a similar structure, they can.”

Forming a private, worker-owned cooperative is no easy task. Like any other small business, it is particularly at risk of failing within the first two years. To improve the odds, Evergreen was built using the Cleveland model, which focuses the business development of a cooperative around the needs of a major anchor institution partner, such as a university or hospital. Institutions like these are unlikely to relocate or close in the near future and can provide the consistent demand necessary for a stable business. Here’s what happened to the three cooperatives that were underway at the time of our first article:

Evergreen Cooperative Laundry, a commercial laundry business, started operations in 2009 with 12 employees, and served University Hospital, slowly building its clientele base with other commercial customers such as hotels, and health care and assisted living facilities. By 2018, the firm had about 50 employees. That year it landed a major contract with the Cleveland Clinic health care system to take over all its laundry and linen management services in Northeast Ohio. This contract allowed Evergreen Cooperative Laundry to quadruple in size, adding 150 new positions and taking over management of Cleveland Clinic’s Collinwood laundry facility to handle the increased laundry load. The plant had originally been owned by Cleveland Clinic but was under outsourced management and on the verge of collapse. Cleveland Clinic decided to rehab and upgrade the Collinwood plant and chose Evergreen to manage and operate it.

Green City Growers, an industrial urban greenhouse, opened in 2013 with 15 employees and today has 45 employee-owners. Operations take place on its 10-acre site in the middle of Cleveland’s Central neighborhood, with 3.25 acres inside a greenhouse. Green City Growers first started by selling fresh produce to its three institutional partners, University Hospital, Cleveland Clinic, and Case Western Reserve University. Over time, it branched out and began selling its produce to wholesale distributors such as US Foods, Sysco, and Hillcrest, as well as local restaurants and retailers including Kroger, West Side Market, Urban Farmer, and Umami.

Evergreen Energy Cooperative, a solar panel installation company, started with 6 employees in 2010 and peaked at 40 employee-owners, but is in the process of winding down operations and transferring its employees to other co-ops. Its business model relied on commercial solar panel installations, but business was not consistent enough to sustain a cooperative. By February 2020, most employees had transferred to Green City Growers, Evergreen Cooperative Laundry, or a newly acquired company named Berry Insulation.

The Rocky Road to Success

Evergreen initially struggled to get off the ground. Though many of the business concepts were sound, the details of operations were rough. “We weren’t selling goods effectively, weren’t delivering consistently, had basic accounting issues,” says McMicken. He advises newer cooperatives to not disregard these aspects of running a small company. “Quality, customer service, operational expertise matter.”

When Evergreen Cooperative Laundry was launched, Evergreen initially did not have experts on staff with operational knowledge of how to specifically run a laundry business. For example, it hired a consultant to provide support in finance and accounting, but while the consultant was experienced in business management, he didn’t have experience in running a commercial laundry business. “Evergreen mispriced how much to charge to do laundry because we didn’t know how to price linen,” says Howard. Evergreen learned from its mistakes and soon after hired a general manager who had run a laundry facility of a similar size.

While Evergreen received ample support from the leadership of its partner institutions, miscommunication inside those institutions due to a failure to involve key parties also proved to be a major impediment. “The CEOs of these institutions would tell us, ‘You build us a professional, healthcare bed-linen laundry facility and we’ll give you contracts,’” recalls Howard. “But then nobody would come. It turned out that while the CEO thought it was a good idea, the procurement office, they’d say, ‘Wait a minute, we’ve got a 10-year contract, we can’t just break it!’” As a result, the laundry’s volume of business grew more slowly than expected.

Another important aspect that both Howard and McMicken believe was not given sufficient attention was building a cooperative culture at the companies. Instead of a group of 50 people working collectively to make decisions, Howard describes it as initially functioning more like 50 people thinking they were each the CEO. They often did not understand in which respects their rights and responsibilities resembled that of an owner, and in which a worker. Early on, worker-owners at Evergreen Laundry Cooperative even opposed taking on new worker-owners because it would reduce profit shares for existing employee-owners.

McMicken says that good communication and effective training are essential to establishing a solid foundation for a collaborative work culture, but they had not budgeted for them in the beginning. Starting in 2018, the company culture has shifted, with the addition of new trainings geared toward familiarizing employee-owners with how cooperatives operate. “We run open book management where employee-owners are very involved in financial statements. They have a much better understanding of why you should add employees; it means that the company is growing. There may be more pieces of the pie, but we wouldn’t be adding more members if the pie wasn’t growing,” McMicken says. He adds that the decision to add new employee-owners is determined by vote, and in the last three years, every employee who was eligible for employee-owner status was approved. Although exact numbers weren’t given, McMicken says that the proportion of workers who were employee owners rose from 50 percent in 2020 to 55 percent today.

McMicken cites the continued commitment and collaboration from major stakeholders such as the City of Cleveland, the Cleveland Foundation, the mayor’s office, the economic development department, and anchor partners, as a major reason Evergreen was able to make it through those initial challenges. “Those individuals committed to this early on and remained committed,” he says. “This is not a feel-good story that you put in the paper one day and then walk away from it a year later. It’s an ongoing thing.” The city also provided a significant amount of capital loans to start the co-ops, and the Cleveland Foundation provided some philanthropic capital. “If you ask, ‘Would that work in Detroit or Chicago?’ well, the question would be ‘How committed are the anchors or local philanthropy to at least get it launched?’ In cities where they didn’t have quite the depth of commitment, the process tends to drag on.”

The Cleveland model has expanded beyond its hometown from which it gets its name to cities like Springfield, Massachusetts, where Wellspring Cooperative has adopted a similar structure and has grown to oversee five cooperative businesses since 2011. Evergreen Cooperative has also served as a consultant for a new laundry cooperative in New Haven, Connecticut, that is still in development.

Despite the success of Evergreen’s first cooperatives and the institutional demand strategy, the organization is transitioning away from building new cooperatives from the ground up and toward an acquire-convert-support strategy. That means Evergreen will acquire successful, existing businesses from retiring owners, convert them into worker-owned cooperatives, provide existing employees a stake in the profits, and integrate the businesses into the Evergreen network. For McMicken, “the goal is employee ownership. That’s the primary metric. We think the acquire-convert-support route will, in the next few years, become the primary methodology because it’s a faster, lower-risk way to reach that goal. You’re starting with businesses that have been around. There are longer startup phases and increased risk associated with starting up a business from the ground up.”